Last weekend on The Lost Child, I played an hour of impeachment songs — not from our own troubled age, but from what I’d call the golden age of impeachment songs, circa 1974 — a wide-ranging collection of blues, soul, country, folk & funk from the heart of the Watergate years. There was more music than I knew what to do with, so I’ve posted the whole show here, along with an extra thirty minutes of bonus songs, and you can stream it anytime.

I hope you’ll give it all a listen, to enjoy the full gamut of Nixon-inspired tunes. Some of this music you won’t hear anywhere else — like this psych-folk record from singer Melany Dyer, who offers a unique perspective on impeachment in her “First Lady’s Lament.” Sample lyrics: So take me, take me, Richard / Take me away in the morn / Before impeachment bells start ringing / And my love turns into scorn.

The Nixon era inspired multiple “Watergate Blues,” along with lots of funk — from the Honeydrippers’ “Impeach the President” to the extended riffs of James Brown’s band, the JB’s (see “Rockin’ Funky Watergate” and “You Can Have Watergate But Give Me Some Bucks and I’ll Be Straight,” both fueled by the mighty trombonist Fred Wesley). Nixon himself actively sought the loyalty of the country music community, launching National Country Music Weeks and appearing, at the height of the scandal, onstage at the Grand Ole Opry. But for all that, even the country crowd would turn on him: in his own “Watergate Blues,” Tom T. Hall imagines dead presidents rolling in their graves and conjures up (“Lord help us all”) a nightmarish vision of America’s future. (A recent Netflix documentary digs into Johnny Cash’s own gutsy clash with the president.) In Franklin, North Carolina, on his own Me Too record label (its logo the head of a Democratic donkey), singer Les Waldroop recorded several variations on the wiretapping theme (“Watergate Bugs,” “Big Watergate Bugs,” “Sermon on the Bug”). You can hear two of them, and a lot of other gems, on my Watergate show. 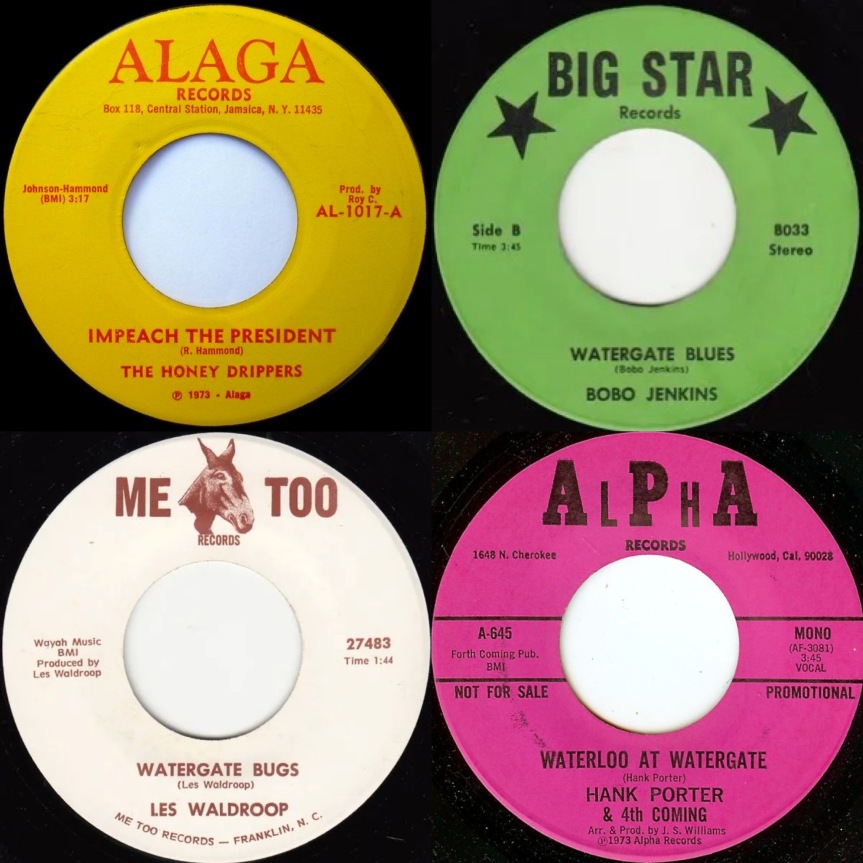 But what of the other impeachments? Surely our nation’s first impeachment — Andrew Johnson’s — inspired a number of songs; I’ve found just a couple so far.

In case you forgot the history, Johnson was impeached by the House, but the Senate failed, by a single vote, to convict him. One pro-Johnson (or at least anti-impeachment) song, “Impeachment’s Sad Fate,” reveled in that failure. Sung to the tune of a cynical Civil War ballad, “Grafted into the Army,” the new lyrics took shots at Benjamin Butler, one of three House impeachment managers who’d failed to sell the pitch for removal. O, Butler! the song proclaims:

’tis well! your impeachment fell
Beneath the Constitution;
You thought men would dare—
Without thought or care,
To despise that institution.

Still, Johnson remained deeply unpopular, even in his own party, and when the next election rolled around, he failed to win the Democratic nomination. A new song — built on the tune of another wartime ballad, “Just Before the Battle, Mother” — let the president know exactly where he stood:

Just before election, Andy
We are thinking most of you;
While we get our ballots handy
Just be sure they’re not for you;
No, dear Andy, you’ll not get them,
But you will get what you deserve;
Yes, you’ll get your leave of absence
As you swing around the curve.

Fast forward to 1999. That year, the Drive-By Truckers gave us an impeachment song like no other, the raucous, singalong saga of “Buffalo Bill,” lampooning the hysteria engendered by the presidential member. “The President’s Penis Is Missing” moves through time and space and concludes that there are just bigger fish to fry: Meanwhile, the whole world’s suffering from hunger and meanness / But we’re all more concerned with the president’s penis.

In his “President Clinton Blues,” Piedmont bluesman Drink Small similarly declares the latest scandal unworthy of our worry. I don’t know why people are worrying about Clinton, Small begins: The man did the same thing that Adam did to Eve. Fair warning, this one’s got a couple of cringey moments that only age worse and worse with time — but it’s a remarkable document all the same, and a throwback to the downhome Watergate blues of Big Joe Williams, Bobo Jenkins, and Sam Chatmon. Small’s take-home message: President Clinton, go on and live your live.

But impeachment songs, post-Nixon, have been relatively few. In 2006, over the course of just nine days, Neil Young cranked out an entire album of urgent, blaring protest songs aimed at George W. Bush. Among the more memorable tracks on Living With War was “Let’s Impeach the President.” But, of course, we didn’t.

And here we are in 2020. Who’s making the impeachment songs now? Twenty years after the jokey “President’s Penis,” the Drive-By Truckers have become more and more overt in their politics, more scathing in their commentary; “The Perilous Night” — released last month, and written before this impeachment saga began — takes on Charlottesville, the president, “White House Fury,” and knocking fascism (“Trump says, ‘Let them in'”).

But the only impeachment-specific songs I know, this go-round, come from Randy Rainbow, who’s been cranking them out like a champ —

So, what have I missed? Tell me your favorite impeachment hits in the comments below. And thanks, as always, for reading and for listening.