This May is huge for lovers of oral history, like me–and for anyone with an interest in American culture, identity, literature, music, history, social movements, or art–thanks to a couple of major releases, out now. First, a previously unpublished book from Zora Neale Hurston–Barracoon, the true story of the last survivor of the last American slave ship–finally hit the stands on May 8. And today(!!) the Studs Terkel Radio Archive has unleashed unto the world a new website with nearly 10,000 hours of radio interviews from 45 years of Terkel’s legendary Chicago radio show.

I am beside myself, and can’t wait to dig into it all.

Hurston and Terkel were two of the first writers I fell in love with, and there aren’t many artists whose voices and visions have made a larger impact on my own way of understanding the world. Both of them were devoted to sharing the stories of “ordinary” people,  believing fiercely in the epic quality of everyday lives. Both advocated a grassroots, street-corner, front-porch, backstage approach to history, centering on those women and men who might otherwise be invisible, voiceless, marginalized, or forgotten. Both were champions of the spoken (and sung) word, the power of the human voice, and the hidden poetries of our day-to-day talk. And while both celebrated humanity in all its forms, with an eye always on the universal, both were uniquely and utterly American. A sense of place pervades their work–for Hurston it’s her native South (particularly Eatonville, Florida) and her adopted Harlem, while for Terkel it’s Chicago–but both artists capture in the sweep of their work a wide range of American experience, complete with all the complexities and contradictions, heartbreaks, struggles and beauty that that experience entails. 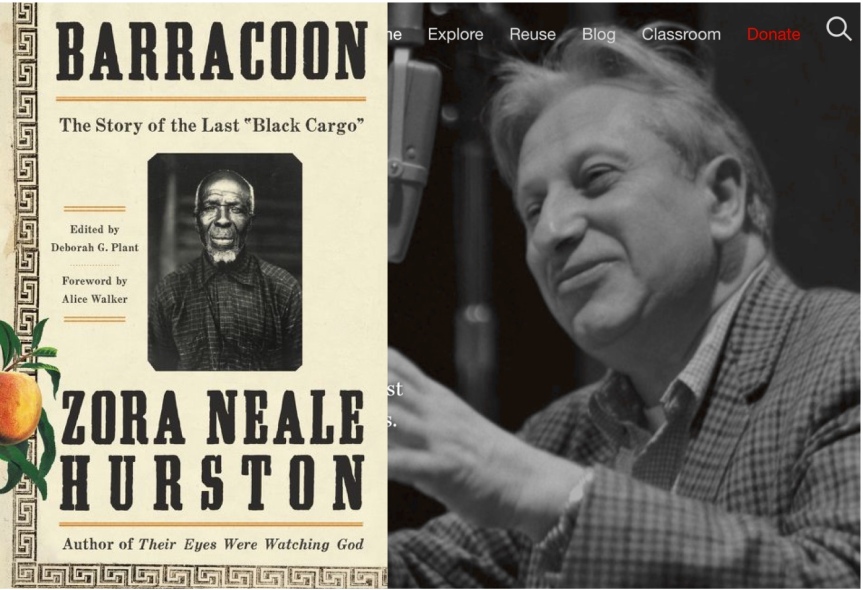 Barracoon: The Story of the Last “Black Cargo” tells the story of Olalule Kossola–or, as he was called in America, Cudjo Lewis. Born in West Dahomey, Africa (today’s Benin),  Kossola was kidnapped in 1860 and illegally smuggled to America aboard the Clotilda, the last of the trans-Atlantic slave ships. He was enslaved for five and a half years on a south Alabama plantation; after Emancipation he and other survivors of the Clotilda established their own, independent community just north of Mobile, a place they called Africatown. Hurston traveled there in 1927 and 1928, and over the course of multiple visits she recorded Kossola’s story in his own words. Hurston was unable in her own lifetime to find a publisher for the book that resulted, and all these years later her original manuscript (edited by Hurston scholar Deborah G. Plant) is finally seeing the light of day. It’s a slim book, but a major contribution both to the historical record and to the literary canon.

The bulk of Barracoon presents Kossola’s story in his own words, an approach Hurston believed was essential for the project: contemporary publishers urged her to rewrite the story in her own voice but Hurston refused, insisting that the narrative belonged to Kossola, in his terms. Hurston’s voice is itself a crucial piece of the work, though, as she frames Kossola’s storytelling with brief descriptions of her visits to his home. They eat peaches or watermelons or crabs together and talk; he tends to his garden; she drives him here or there or offers him a hand with his day’s work. Some days he is gregarious and warm; other conversations are tense and brief. Hurston observes the awful weight of heartbreak and homesickness that shapes Kossola’s life, and she honors his need, some days, not to talk at all. I’m only midway through the book, and already Barracoon is proving invaluable for its presentation of Kossola’s unique voice and experience–from Africa through slavery to Emancipation and beyond–but it’s a treasure too for anyone with an interest in Hurston herself: a creative force whose mission, process, and personality inform all aspects of this book.

Then there is Studs. Over the course of a long career he published numerous books of oral history, most famously the landmark Working (subtitle: People Talk About What They Do All Day and How They Feel About What They Do)–a book which I first encountered as a teenager and which, like Hurston’s Mules and Men, had a huge impact on the sorts of things I’d one day want to write about myself. In other books Terkel tackled the subjects of race, death, class, music, the movies, the Great Depression, World War II, the American Dream, social justice, and more. But alongside all those remarkable books he was building an equally impressive body of work through his radio talk show, broadcasting for nearly half a century on Chicago station WFMT. Nearly 2,000(!) hours of these broadcasts are now available at the Studs Terkel Radio Archive, which unveiled its new website today–and which promises many more hundreds of hours to come. The wealth of conversations here is staggering: Terkel talks to civil rights leaders, musicians, authors, historians, filmmakers, anthropologists, scientists, actors, activists, and a whole host of other culture makers. As in his books, he shares the voices of the unknown and unsung; but here he also speaks with an enormous cast of iconic personalities, engaging in conversation some of the most influential figures of the last century. I’m looking forward to listening to interviews with (for starters) Muhammad Ali, Dizzy Gillespie, and my cousins Cliff and Virginia Durr. Then there’s the 1965 interview with Tom Wolfe, who died yesterday; in it Wolfe discusses his just-published first book, The Kandy-Kolored Tangerine Flake Streamline Baby. Additional interviews are still being added: I hope that soon we’ll be able to hear Terkel’s talks with Martin Luther King, Langston Hughes, Pete Seeger, Mahalia Jackson, Big Bill Broonzy, and others. There are, of course, lots of musicians here: like Hurston, Terkel had a deep love for music–in particular for blues, jazz, and folk song–and his work, like Hurston’s, is informed at every step by music. But take a look around the archive, yourself, and see what jumps out. There is plenty here to explore.

For years I’ve wanted somebody to write a good biography of Studs Terkel; of all the unborn books waiting to be written, this is the one I’m most eagerly awaiting. Hopefully someone out there will get on that soon. In the meantime, we can keep ourselves busy and inspired with this incredible archive, and with Hurston’s Barracoon. I’m grateful to every person who had a hand in bringing either of these projects into the world.

I think pretty soon it’ll be hard to imagine how we ever managed without them.