At the start of this school year, I moved into a new classroom and had a new, big, blank cinder-block wall to fill. So I used one of those giant printers to print out life-sized and larger-than-life photos of a few American literary icons, and I arranged their faces into a huge collage:

I think of it as a (partial!) Mount Rushmore of American writing, a wall of literary ancestors. Their job is to remind us that our words, too, can change the world.

Over the course of my Creative Writing course, we’ll read at least a little something by most of these writers, and sooner or later we’ll talk — at least a little — about the rest. To be sure, it’s a subjective and incomplete wall of ancestors, filtering the “canon” through my own biases and tastes, but it’s a start. (I keep in the hollow space of my podium a huge, rolled up head of Kurt Vonnegut, whose impish sidelong glance I just couldn’t fit, physically, anywhere into that puzzle of faces. Later I may create a second line-up on another wall; in the meantime, when Vonnegut comes up in discussion, I can whip out and unfurl his image.)

Especially because Creative Writing happens to be the first period of the day — and because I think some “mindless” drawing can awaken some playful, spontaneous, unpredictable part of the brain — I sometimes like to start the class by asking students to draw for five or six minutes. I’ve asked them to reserve the first three pages of their Creative Writing notebooks for these start-of-class drawings and doodles, so that by the end of the year those pages will be crammed with all sorts of images — images which will serve as untamed and untranslatable intro to all the words that will follow. Of course, half the class complains that they “can’t draw,” which is the real point (it turns out, they can). But because they only have five minutes for the drawings, the perfectionists have to abandon perfectionism and the slow-to-starters have to jump in, ready or not. There’s no time to think, and everybody is equal.

I started the year’s drawing times by having students choose one of the big literary faces on the wall and try, quickly, to draw it. At the start of the year, they’re likely to know something about one or two of these writers — probably Zora Neale Hurston and Langston Hughes — but the rest, so far, are strangers to them. Ultimately you have to choose your own creative ancestors, and I know my students haven’t chosen these particular writers as theirs. But that’s part of what I like about these first drawing activities: I tell them to just choose whichever face stands out or interests them the most, and spend a few minutes with it. Maybe later a voice or a meaning, or some historical weight or baggage, will attach itself to the face and the drawing. But for now you’re just moving your pencil or pen across a sheet of paper, waking up your brain. 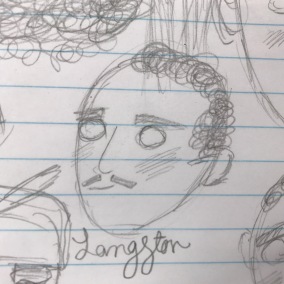 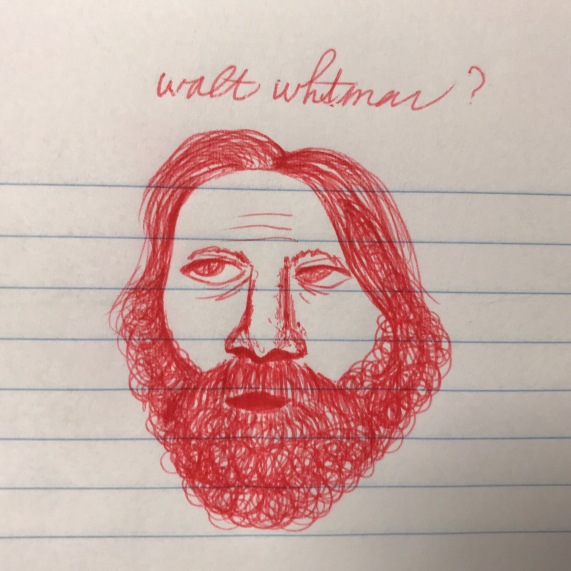 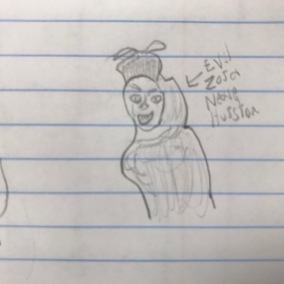 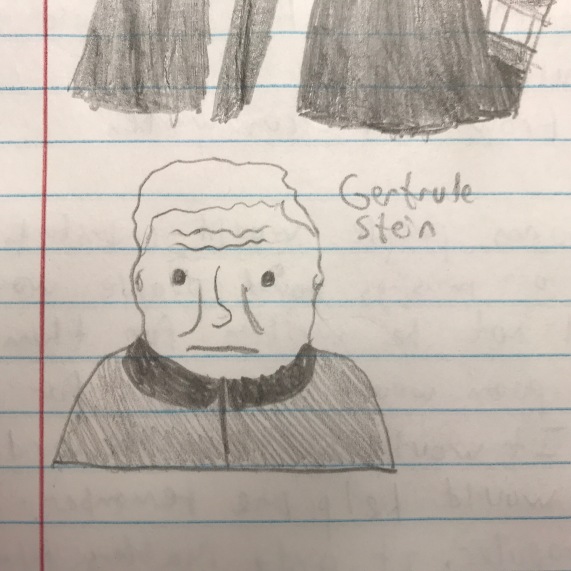 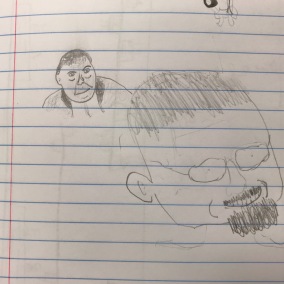 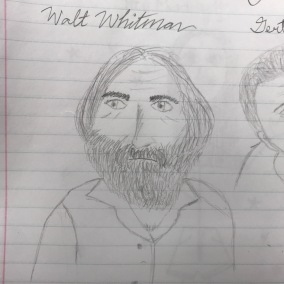 Another reason I like starting with the same limited group of faces, before students branch out into their own, is because I love the variation you get from a few repeated, recognizable images. Each Gertrude Stein reflects its drawer’s personality above all; the result is part Gertrude Stein and mostly that student. No two Gertrude Steins are alike — but they’re just enough alike to make those differences magical. 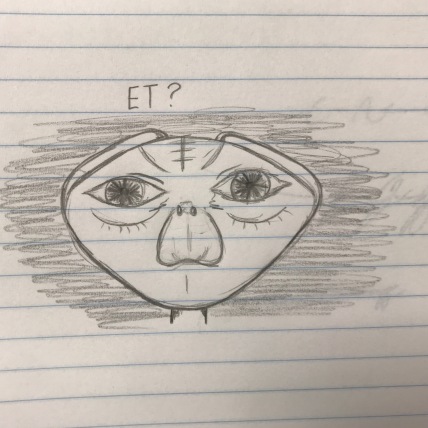 You can see a few of the students’ own heroes and ancestors mixed in among these sample drawings; I’ll post some more later on in the year. (One day I gave them the option of drawing anything in the room. A student in my film class had recently brought in a wonderful, creepy E.T. mask that her father had made her, out of felt, years ago, as a Halloween costume; it was still hanging on a hook in the front of the room, which is why you see that E.T. There are a couple of stuffed Kermit the Frogs on my bookshelf, too.)

Here’s an assignment, if you want one. I recommend starting your day with this, to warm yourself up — if not first thing in the morning, then right before you begin the most productive part of your workday. Take about five minutes to draw one of your own creative heroes or ancestors (a writer, artist, musician, filmmaker, comedian, teacher, lawyer, whatever — maybe choose somebody you admire from your own line of work, someone whose example reminds you why you do what you do).

Keep it to about five minutes. That way it’s not a huge time commitment, and it takes the pressure off: you can’t expect it to be super-accurate, and you can’t worry about whether it’s “good.”

When your five-ish minutes is up, look back upon your creation. Don’t ball it up or throw it away. Take a picture or scan it, and send me a copy (burgin@bhammountainradio.com). Then put the original on your refrigerator or over your desk, or leave it in a public space for a stranger to find.

Here’s an idea, if you want to really go all-in: get a notebook just for this. Spend five minutes doing this, every day for 30 days — or, if you like, for 365 days. Set a goal and keep it up. Create a diary of five-minute faces, a one-of-a-kind, homemade, ever-growing book of ancestors. Occasionally send me pictures (again: burgin@bhammountainradio.com).

Or, finally, an alternate assignment, if you prefer the mystery of losing yourself in a stranger’s face: Google “Czech authors” or “Ugandan authors” or “Indian” or “Hungarian authors” (someplace whose literacy ancestry is unknown to you). Choose the face that most arrests you, and spend five minutes drawing it. Be sure to write the author’s name beside, around, or under the drawing, and maybe (quickly) add to that a book title, birthdate, or fun fact, whatever you get when you click that person’s picture.

I am certain that you will create something magical that otherwise would never have existed. Give it five minutes and see.

P. S. This week I got my hands on the new book by Lynda Barry, Making Comics, and it’s wonderful, offering many of Barry’s own exercises to draw your way into unexpected and extraordinary, imaginative places. Don’t let the title fool you: her book isn’t for aspiring comics artists (although those people should get it, too), nearly so much as it is for the rest of us — especially those of us who quit drawing pictures around the same time we stopped being kids.

P. P. S. Here are a few of my favorite things from the drawings above: Langston Hughes at an enormous, blank typewriter; all the Toni Morrisons; the bored, tired, or mildly annoyed Whitmans; “powerful.” Also this truth: that sometimes when you’re drawing, your pencil produces something your brain didn’t mean or want (a “mistake”) and you just have to run with and reclaim it. So Zora Neale Hurston becomes “Evil Zora Neale Hurston” — which is pretty wonderful in itself.

Don’t forget to send me your drawings! Thanks for reading.

Emily Brontë, age 21, in the margins beneath a new poem:

“I am more terrifically and infernally and idiotically and brutally STUPID—than ever I was in the whole course of my incarnate existence. The above precious lines are the fruits of one hour’s most agonizing labor between ½ past 6 and ½ past 7 in the evening of July – 1836.”

There’s also this, from Flannery O’Connor:

“Writing a novel is a terrible experience, during which the hair often falls out and the teeth decay.”