Every day this month, I’m posting to Instagram photos and memorabilia from Birmingham, Alabama’s extraordinary — and, for the most part, unknown — jazz history, the subject of my current book-in-progress. I’ve been cracking away at this book for a few years and am getting ready at last to try to find it a good home for publication. (Wish me luck.) In the meantime, consider these photos a preview of much more to come. Here are the first five days of Instagram posts; to see the rest, please follow along on Instagram or Facebook. Let me know your faves as the month unfolds. 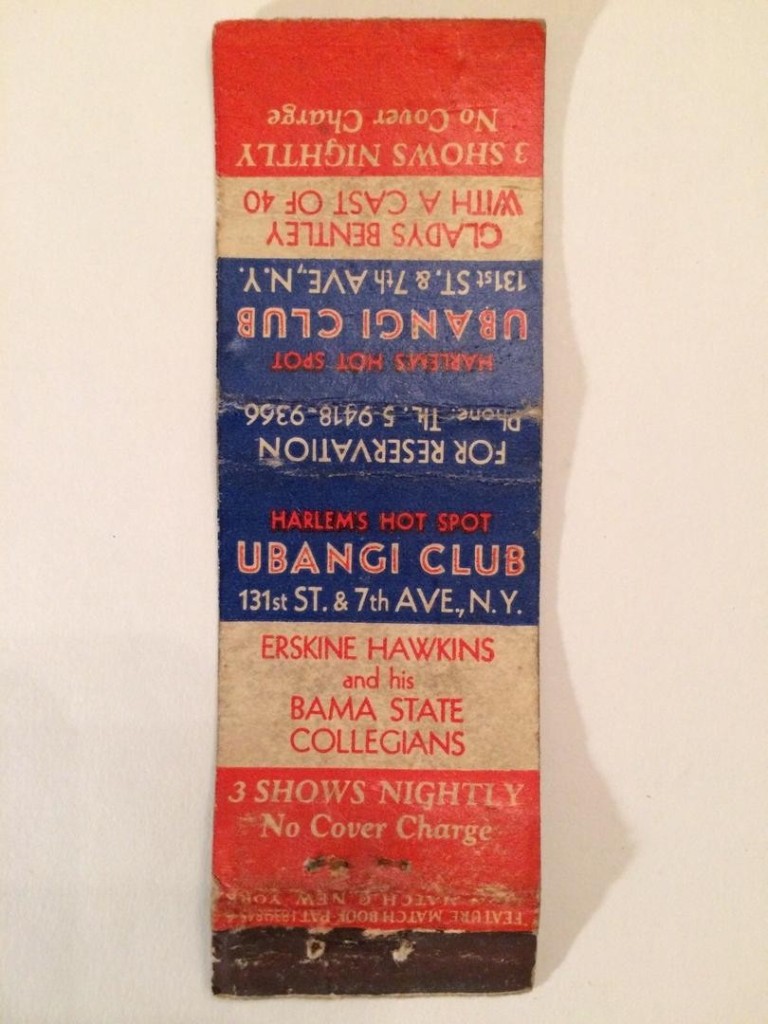 Dec. 31: Every day for the month of January, I’ll be posting a photo, or some other memorabilia, from the history of Birmingham jazz. I’m starting a day early, with this one: a matchbook from Harlem’s Ubangi Club, where the ‘Bama State Collegians landed their breakout New York gig. The Collegians were a bunch of musicians out of Birmingham who enrolled for college at Alabama State in Montgomery. Their band helped the school survive the Depression as they traveled the South and beyond, raising money and recruiting new students for the college. Soon after the Ubangi gig—where they backed the cross dressing, outrageous and raunchy Gladys Bentley—the Collegians cut their ties to Alabama State and became the Erskine Hawkins Orchestra, one of the most popular bands of the swing era. Many more images and history to come, all through January. Stay tuned. Jan. 1: Every day this month, I’m posting a photo from the history of Birmingham jazz. Here’s Ivory “Pops” Williams, grandfather to Birmingham’s historic jazz community. Regarded as the city’s first jazz musician, Pops (born in 1885) served as a crucial link between Birmingham and the larger world of music. He played with W.C. Handy, Bessie Smith, and the celebrated circus bandmaster, P.G. Lowery; he led the house band at Birmingham’s Hippodrome Theater; he co-founded the city’s first musicians union for African Americans (after being denied entry in the white local); and he served as mentor to Fess Whatley, Birmingham’s once legendary “Maker of Musicians.” Pops played violin, upright bass, tenor banjo, mandolin, cello, trumpet, trombone, and drums, and he was a great advocate for the use of stringed instruments—in classical music, in jazz, and in the classrooms of Birmingham’s segregated black schools. Like many musicians of his era, he played for the silent movies and, once sound came in and put him out of a job, he refused for the rest of his life to enter a movie theater. In the ‘40s her played the upright bass in Sun Ra’s Birmingham band; in the ‘50s and ‘60s he played with local bandleader Frank Adams at the Woodland Club and other local venues. He died in 1987, at the age of 102. He’s pictured here — courtesy the @alabamajazzhall of Fame — with his violin and two of his many dogs. 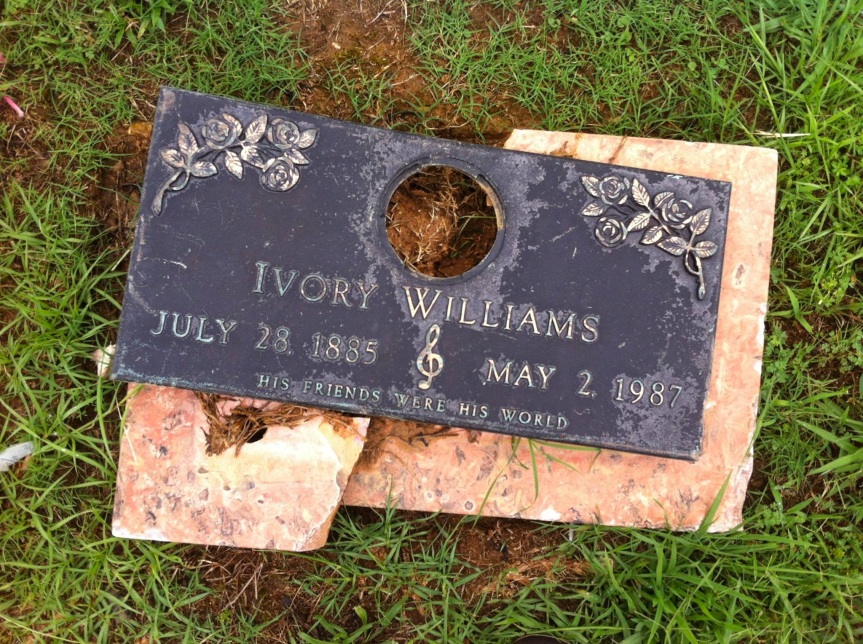 Jan. 2: Every day this month I’m posting a photo from the history of Birmingham jazz. Here’s the grave of Ivory “Pops” Williams, who I wrote about yesterday, Birmingham’s first jazz musician and the grandfather to a fertile music community. Pops grew up with the city of Birmingham, witnessed the birth and development of jazz, and became a patriarch in his community. He lived to be 102. The words on his headstone (sadly, the stone is now broken): “His friends were his world.” 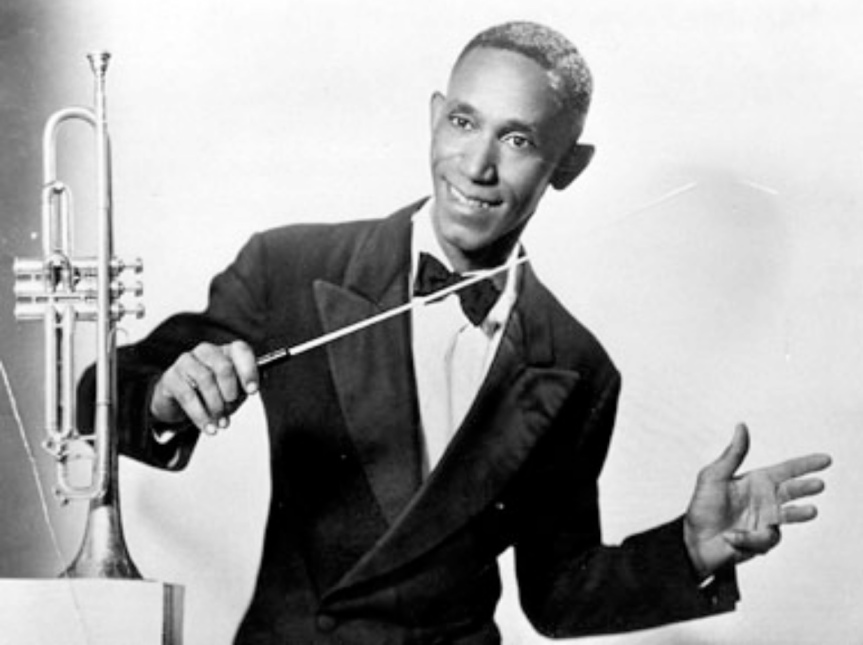 Jan. 3: This is John T. “Fess” Whatley, the legendary “Maker of Musicians,” the man at the center of the city’s jazz tradition. From 1917 to 1964, Fess led the band at Industrial High School (renamed A.H. Parker High School in the ‘40s), and his band room trained scores of professional musicians. Whatley’s students played in all the major black bands of the swing era—Ellington’s, Basie’s, Louis Armstrong’s, Cab Calloway’s, and more—and Birmingham gained a reputation among the nation’s top bandleaders as a reliable reservoir of talent. Fess also led the city’s first jazz band, the Jazz Demons, and for decades he provided music for the majority of the city’s elite “society” dances, both black and white. Stay tuned every day this month for more from Birmingham’s unsung jazz history.

Jan. 4: Ridiculous? No! Every day this month I’m posting a photo from the history of Birmingham jazz. Huntington “Big Joe” Alexander was a powerful tenor sax player who left Birmingham to study at the Detroit Conservatory of Music and landed, in the mid-1950s, in Cleveland, where he became an icon in the local scene. Mostly forgotten today, he was a member of Sonny Blount’s (Sun Ra’s) innovative Birmingham band in the 1940s (it was Sun Ra who moved him from the alto sax to the tenor, to give him a “bigger” sound), and he’s considered a likely early influence on John Coltrane, with whom he played as members of Gay Crosse’s Good Humor Six. This standing $500 reward for any sax player who could “outblow” him drew many competitors to Rip’s Shangri La in Cleveland, where Big Joe played a long-running gig, but no challenger every succeeded in taking the money. Joe recorded his only album as bandleader, “Blue Jubilee,” in 1960. He died in 1970, at the age of 41, after a struggle with a debilitating heart condition. A jazz funeral was held in his honor.

Remember to follow my radio show, The Lost Child, on Instagram and/or Facebook for more photos, all this month. For all other sorts of updates — and for new writing, musings and music, plus occasional drawings — keep following this blog.

Also, please know you can support the next book by supporting the last book: Doc: The Story of a Birmingham Jazz Man was just issued in paperback by the University of Alabama Press. At $19.99, it’s a cool $15 cheaper than it used to be, which is great. And it contains personal reflections on all the musicians listed above: Doc Adams played with Fess Whatley, Sun Ra, Pops Williams, Erskine Hawkins, and Big Joe Alexander (his cousin). You can get the book online or, better yet, from your local book dealer. If you’re in Birmingham, join us for the paperback release party next Thursday night (January 10) at the Little Professor Bookcenter.

An unexpected & generous listener donation to The Lost Child recently helped me score this exciting trove of albums from @fieldrecorderscollective — so much great music here, and tons of inspiration for future radio shows. I’ll play 2-3 tracks from this collection on tomorrow’s show and look forward to bringing you more of this music in the weeks and months and years to come.
#dorothylovecoates #gospelharmonettes #ninetynineandahalfwontdo #gospelmusic #gospelmusichistory #birminghamalabama #bookofancestors
Dr. D. Dix Hollis, celebrated brag fiddler of Sulligent, Alabama.
In 1967, Jefferson State Junior College expelled two students -- Robert Alexander & Roy Zachry, members of the Birmingham garage rock band The Distortions -- because they refused to cut their shaggy hair. The students sued the school, and in the case of Zachry v. Brown, U.S. District Judge Seybourn Harris Lynne ruled in the students’ favor. From Judge Lynn’s opinion: “Each plaintiff is a member of ‘The Distortions’, a band enjoying widespread popularity among the young people of this section. To establish and promote a public image the members of this band have adopted "page-boy" haircuts.... It is crystal clear from the admissions of defendants as witnesses that [school administrators’] insistence upon the withdrawal of plaintiffs from the college was motivated altogether by their dislike of what they considered exotic hairstyling. There is no suggestion that the page-boy haircuts affected by plaintiffs had any effect upon the health, discipline or decorum of the institution. Zachry was a candidate for the office of president of the freshman class and under the undisputed evidence in this case he would have been elected had he not been forced to withdraw. It may fairly be conjectured that the prospect of a young man with a page-boy haircut serving as president of his class triggered the action of defendants.”